The cornea is the window of the eye. Light travels through the cornea past the lens to the retina and then the brain to form a visual image. The normal corneal surface is smooth and aspheric i.e. round in the center, flattening towards its outer edges. Light rays passing through it moves in an undistorted manner to the retina to project a clear image to the brain. In patients with keratoconus the cornea is cone shaped (hence the name keratoconus, derived from the greek word for cornea (‘kerato’) and cone shaped (‘conus’). In patients with keratoconus the cornea is not only cone shaped but the surface is also irregular resulting in a distorted image being projected onto the brain. 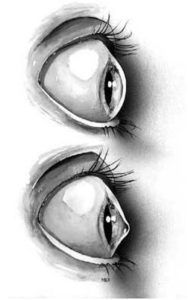 Because the cornea is irregular and cone shaped, glasses do not adequately correct the vision in patients with keratoconus since they cannot conform to the shape of the eye. Oftentimes patients first receive this diagnosis after seeking consultation for repeatedly needing eyeglass adjustments. Patients with keratoconus typically see best with rigid contact lenses since these lenses provide a clear surface in front of the cornea allowing the light rays to be projected clearly to the retina. Hence the vast majority of patients are treated with rigid contact lenses. There are however some excellent surgical options for patients with keratoconus who cannot tolerate these lenses, these options are discussed under corneal surgery.

Many patients are initially unaware they have keratoconus and come to Phoenix Ophthalmologists because of increasing spectacle blur or progressive changes in their prescription. In many instances even a good refraction yields poor vision. Keratoconus is most often diagnosed by our doctors when they see typical findings when examining the patient at the slit-lamp. In early forms of the disease there may be no obvious finding on slit-lamp evaluation and the diagnosis is made by corneal topography or keratometry only.

Keratoconus typically commences at puberty and progresses to the mid thirties at which time progression slows and often stops. Between age 12 and 35 it can arrest or progress at any time and there is now way to predict how fast it will progress or if it will progress at all. In general young patients with advanced disease are more likely to progress to the point where they may ultimately require some form of surgical intervention. Keratoconus may occur in one eye only initially but most commonly affects both eyes with one eye being more severely affected than the other. Both males and females are equally affected and there is generally no ethnic predilection.

Despite millions of dollars being spent on keratoconus no one truly knows the cause of the disease. There have been many interesting theories but none of them have been proven conclusively neither have any of them consistently been reproduced by multiple research groups. For example one theory suggests that there is deficient collagen crosslinking caused by free radicals but there is no scientific reproducible evidence to support such a theory. Others suggest that eye rubbing causes the progression of keratoconus. The evidence for this is however anecdotal based on several case reports, but again there is no reproducible scientific evidence to support this. At Phoenix Ophthalmologists, Dr. Van Buren is able to identify and manage mild to severe keratoconus. Please call us today to schedule and appointment.