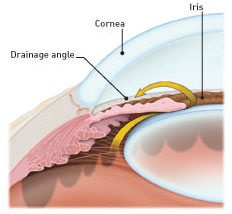 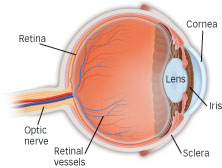 In the healthy eye, a clear fluid called aqueous (pronounced AY-kwee-us) humor circulates inside the front portion of your eye. To maintain a constant healthy eye pressure, your eye continually produces a small amount of aqueous humor while an equal amount of this fluid flows out of your eye. The fluid flows out through a very tiny drain called the trabecular meshwork, a complex network of cells and tissue in an area called the drainage angle.

If you have glaucoma, the aqueous humor does not flow through the trabecular meshwork properly. Fluid pressure in the eye builds up and over time causes damage to the nerve fibers.

Glaucoma can cause blindness if it is left untreated. Only about half of the three million Americans who have glaucoma are even aware that they have the condition. When glaucoma develops, usually you don’t have any early symptoms and the disease progresses slowly. In this way, glaucoma can steal your sight very gradually. Fortunately, early detection and treatment can help preserve your vision.

The most common form of glaucoma is called primary open-angle glaucoma. It occurs when the trabecular meshwork of the eye gradually becomes less efficient at draining fluid. As this happens, your eye pressure, called intraocular pressure (IOP), rises. Raised eye pressure leads to damage of the optic nerve. Damage to the optic nerve can occur at different eye pressures among different patients. Dr. Van Buren or Dr. Mackman establishes a target eye pressure for you that he predicts will protect your optic nerve from further damage. Different patients have different target pressures. Typically, open-angle glaucoma has no symptoms in its early stages and your vision remains normal. As the optic nerve becomes more damaged, blank spots begin to appear in your field of vision. You usually won’t notice these blank spots in your day-to-day activities until the optic nerve is significantly damaged and these spots become large. If all of the optic nerve fibers die, blindness results. Half of patients with glaucoma do not have high eye pressure when first examined. That is why it is essential that the optic nerve be examined by an ophthalmologist for proper diagnosis.

Eye pressure is expressed in millimeters of mercury (mm Hg), the same unit of measurement used in weather barometers. Although normal eye pressure is considered a measurement less than 21 mm Hg, this can be misleading. Some people have a type of glaucoma called normal-tension, or low-tension glaucoma. Their eye pressure is consistently below 21 mm Hg, but optic nerve damage and visual field loss still occur. People with normal-tension glaucoma typically receive the same methods of treatment used for open-angle glaucoma. Conversely, ocular hypertension is a condition where someone has higher eye pressure than normal, but does not have other signs of glaucoma, such as optic nerve damage or blank spots that show up in their peripheral (side) vision when tested. Someone with ocular hypertension is considered a “glaucoma suspect” because he or she may be at risk for developing glaucoma later. Just like people with glaucoma, people with ocular hypertension need to be closely monitored by an ophthalmologist to ensure they receive appropriate treatment.

Eye injury
Inflammation of the eye
Abnormal blood vessel formation from diabetes or retinal blood vessel blockage
Use of steroid-containing medications (pills, eyedrops, sprays)
Pigment dispersion: tiny fragments or granules from the iris (the colored part of the eye) can circulate in the aqueous humor (the fluid within the front portion of the eye) and block the trabecular meshwork, the tiny drain for the eye’s aqueous humor.